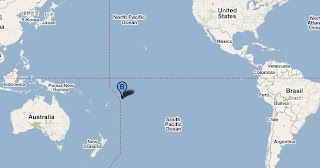 Here I go: trying to decipher dad's journal that
he wrote on this expedition.I had thought that maybe
I could just put in the interesting bits, but I have
decided to put it down verbatim, which while it may
be a bit dry, should provide for historical accuracy!
Hopefully in the coming few months I will
do a day at a time. Just looking ahead, I see his last
entry was on 21st July 1951 at Aitutaki, so it must
have been his last stop before coming home.

At approx 1905 z on the 5th the engines were started on Catalina ZK-AMP and moorings slipped to begin the first leg of the Pacific Islands Survey.

After run-up, of engines, course was set for Suva,Fiji and after a flight time of8 hours and 40 minutes under good flight conditions throughout, the aircraft touched down in Lauthala Bay where it was beached by the RNZAF for convenience.

On arrival in Suva the party was joined by Mr Brodie-Civil Aviation Branch, who was to take charge of the survey.
Mr Wilson-Accounts Branch Civil Aviation
Mr W. Bignall-Public Works.
Accomodation arranged at the Garrich Hotel and then a hurried visit to an Indian tailor who was to make some clothes suitable for the voyage.
Posted by William Le Couteur at 1:15 AM