After a night of heavy electrical storms, the day dawned clear, but overcast, we arise at 6am. Breakfast at 7am and on the way to Satapuala by 7.45. We had to call into the Public Works Department Works to get a bit of gear in shackles and rope for the aircraft.
After this we commenced marking out the 5000 yard runway with 44 Gallon drums and any old weight for a sinker. This involved waiting until the marker boat was correctly sighted by the two surveyors marking the spot with a float, then tumbling over the big drum suitably weighted to float in the depths up to 42 feet. The boats are very slow in getting going. Eventually we packed up for the day and were pleased to get home.
There is a grass here which has a burr seed and leaves like wattle, but much smaller and when touched the whole lot has the appearance of wilting, and therefore called sensative grass.
Bills Note:I have a about 20 photos-where they were taken, I don't know, but it seems a good idea to put about 2 photos with each post from here on. 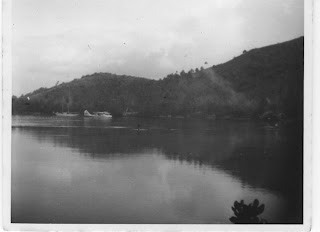 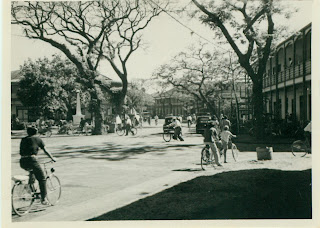 Posted by William Le Couteur at 10:32 PM No comments:

The day slightly overcast but warm and after breakfast we took cars up to the Commissioner's Residence and after wandering the grounds an admiring the riot of colours in the flowers and shrubs, we commenced the long plod up the hill to the grave of Robert Louis Stevenson, of Treasure Island fame and champion of the natives cause here where he was much beloved and where he died at an early age of consumption.

The tomb is on the top of a point where it overlooks the town of Apia, very high and reached only after a long plod. Took some snaps and then commenced the descent to have a glorious swim in a mountain pool, nice and cool.

Invited over to the ADC's residence and lowered a drop of his "poison". In the afternoon had a sleep and then went for a walk with Bert Carlyon and finished up at the RSA Club to shelter from the terrific downpour and of got talking to the members who are very keen to see the service started up and of course most optomistic about it too, particularly as they do not have to pay.
Posted by William Le Couteur at 12:50 AM No comments:

Yet more pics of Flying Boats! 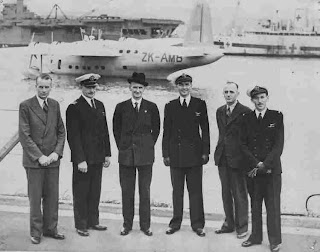 No Cliff here, but this would be a historic photo-someone had taken the trouble to write on the back of the photo who these men were:
"Launching of the "Tasman" at Short and Harlands, Belfast, July 1st 1946
Tasman Empire Airways representatives."
From left, Geoff Wells (Engine inspector), Capt A.V.Jury (Pilot), Mr White (Vice Chairman), First Officer Mr McGrane (Navigator/Co-pilot),Mr E.Nichols(Radio Supervisor), Engineer Officer D.R Philips(Flight Engineer) 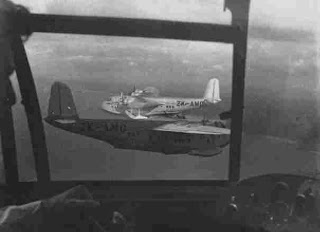 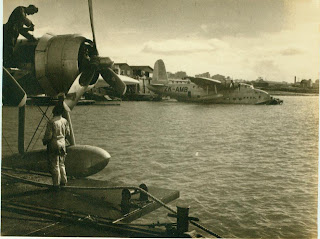 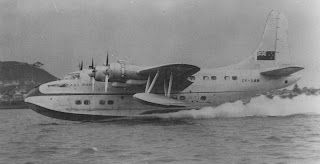 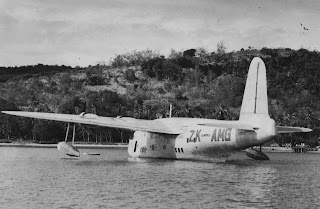 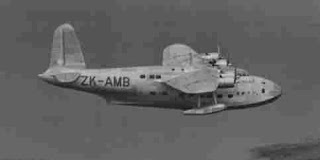 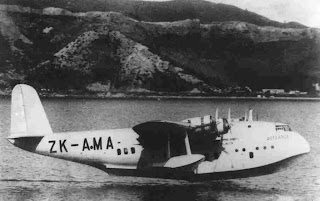 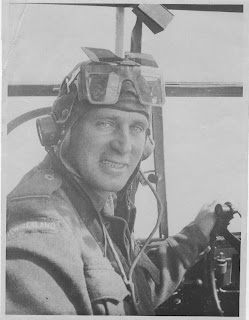 Cliff in the Air Force 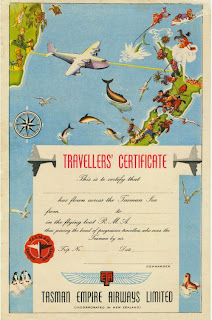 Posted by William Le Couteur at 7:36 PM No comments:

Bills note:the following is a scanned piece from a newspaper clipping....

WHEN Clifford John LeCouteur flew TEAL'S first flight to Tahiti recently, natives along the route looked at him as though they had never seen him before. Passengers too, who marked his correct uniform, could not have recognised the man who had made the survey flight of these less accessible Pacific Islands some months before.

With' several days' beard on his face, a deep shade of sunburn and a pair of swim trunks, LeCouteur, a well-kept 39, looked much like another native. The only obvious signs of civilisation he wore during his working day were swim flippers and mask to aid diving operations.

For months his life followed the pattern of daydreams most men have at some stage of their lives. He had his south sea island beach, a native boy—or sometimes girl—to wait on him, and in addition, the comfortable feeling that his wife and three children were waiting for him in his modern Auckland home.

As the flying-boat on the Coral Sea route touches down at Suva, Satapuala (Western Samoa), Aituaki (Cook Islands) and Papeete (Tahiti) few passengers realise that it took months to carve the solid coral from the runways. LeCouteur's job on the survey flight was to make alighting areas which would come up to ICAO (International Council of Aircraft Organisations) standards — 13,000ft long, 750ft wide and 10ft deep. To do it he had a working team of 11, consisting of the flight crew and representatives from the Civil Aviation branch, the Ministry of Works, and the Lands and Survey departments of the NZ Government. He also had a handful of natives recruited in the islands.

Equipment, such as coconuts used as markers, was primitive. Strip surveys were made by two extraordinary contraptions christened Kon Tiki Mark 1 and Mark 2, in memory of Thor Heyerdahl's Transpacific raft. They were triangular in shape with crossbars supporting 14ft of pipe hanging down to check the depth. According to the state of the tide the pipe could be raised or lowered to give a mean level. The survey of a strip was controlled by walkie-talkie radio from the beach.

The Catalina LeCouteur used for survey had the advantage of being able to land in 6ft of water, a big factor in uncharted lagoons where coral might be anything from 3ft to 30ft under the surface. In this respect he was more fortunate than once during the war when as a flight-lieutenant piloting a Sunderland, he tore the bottom out of the craft from bow to gun-blisters in a heavy sea on take-off. He carried out his patrol and returned with inflated rubber dinghies wedged in the battered belly of the plane.

LeCouteur's survey is thought to be the first to touch Palmerston Island since Captain Cook fixed its position. Other parts of the flight were also navigated from old Admiralty charts. McGreal, first officer on the flight, announcing arrival at the island with its latitude and longitude, said over the plane intercommunication system, "And I will have you know Captain Cook and I are in complete agreement."
Posted by William Le Couteur at 6:49 PM No comments:

Some Photos of Flying Boats 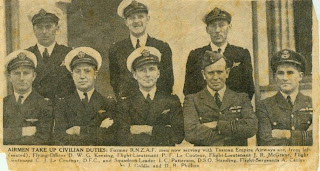 This must have been taken just after the war..... 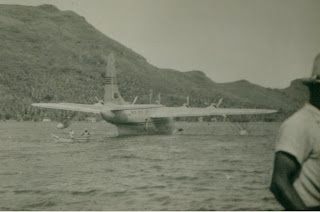 Out of the water for maintenance. 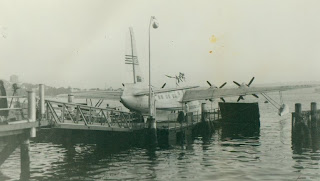 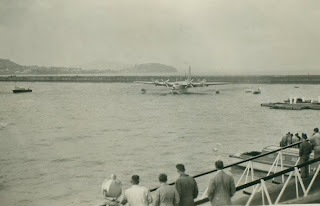 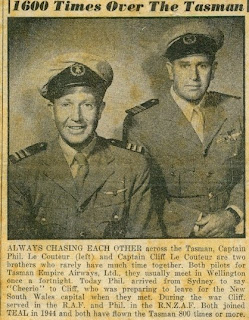 Cliff with his brother Phil, who also was a pilot with TEAL.

This is the Catalina as used on the Pacific Survey of 1951.

Posted by William Le Couteur at 4:21 PM No comments:

Bill's note:You can see the date is 8.5th of June-this is to distinguish this day from the previous one because he crossed over the International date line! He marked it as the 8th,Saturday-Friday!

The day dawned bright and really lovely, warm, the air scented and from "Aggies" we overlook the Apia Harbour. The harbour is reef girt and the remnants of the once proud German battleship Adler are still exposed on the reef where she was driven ashore in a cyclone together with som ships of the American Navy. The British ship HMS Calliope decided not to stay in port during the rising seas and stood out clear of the island and rode out the storm. The event occurred during the time when Samoa was a German colony.

Refuelling was the order of the day and it took a lot of time in the heat to get the job done.
However, it was accomplished and the aircraft brought to a state of readiness for any demand which may be made upon it.

We mopped up some coconut juice - the native just shimied up the tree and had them in a trice. On returning to Apia I received an invitation to visit the residence of His Majesty's High Commissioner and partake of cocktails. This entailed much hurry and sweat and eventually I arrived cool etc. Nice place - must become a High Commissioner. Mr and Mrs Powel, from Wellington, New Zealand.
Posted by William Le Couteur at 12:45 AM No comments: