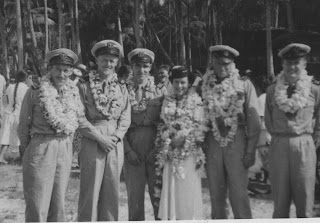 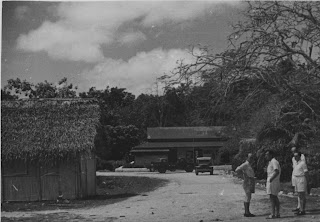 Heavy rain here today, and it has been organised for the party to visit one of the native villages. We left "Aggies" at approx 9.30 and it rained until clear of the town, then it cleared. The native chief who is reputed to be quite a character in the area is called "Savai" and the village Afegi.
Pronounced Afengi, the "n" being a non epistant in Samoan, and it is written as a "g".
After a walk around the village where we inspected coco trees and pods, kava tree roots, sago and quite a few others, we repaired to the meeting house and there squatted down cross legged on mats and the speechifying began.
God and his works came into the old chief's words quite frequently and it was explained that he was a deacon in the village church. Even I was asked to talk, and from the remarks passed it went over better than Brodie's, who was leader of the party.
After much speechifying, banana leaves were brought in and placed long-wise on the floor of the house and then, chicken, whole fish, bread fruit and taro. As well, a delightful mixture called or pronounced pala-sami, which is made up of an outer wrapping of banana leaf, with an inner layer of taro leaf mixture, coconut and odds and ends. Any way, it tasted fine.
This sitting cross legged played havoc with some of the types, as it is considered an insult to stick them straight out in front. So after the feast was over, no knives or plates or forks, we washed our hands in bowls of waster, and didn't they need it too.
Very sweet, weak tea and sponge cake followed. The cake was baked in the old camp oven and was very light and good to eat. All this was very fine we thought and it was a nice gesture when one considers they were up at 5am preparing the food.
The general set-up was, our party, and on the other welcoming side was the chief, his talking chief, the chief's wife and "bebe" (baby), the chief's daughter and one or two of the lesser lights. The chief's daughter, as the village virgin, was expected to set a good example to all the rest of the young people in respect of morals.
The meeting house was a good example of native craftsmanship in design and construction. An old organ standing in the corner had most of the keys eaten away by wood ants and borer.
After an enjoyable stay, we departed for the city, after we had given assurances that we had accepted the village as our island home.
Went up to the hospital about my head and after waiting an hour and 15 minutes came away without seeing anyone.
Posted by William Le Couteur at 2:41 AM