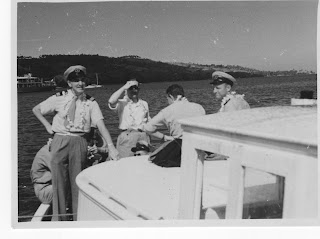 Once again out to Satapuala and because of the modifications to be made to the sweeps, we were engaged in putting down more marker buoys. There are about 40 buoys now in position and every one has a great piece of weight ie an old truck differential or something tied to it and I have tied every damn one on and placed every buoy over the side.
It is interesting to see just how money, particularly the taxpayer's money is frittered away on idle schemes. I can lay some claim to being a practical minded man, but these CAB and PWD boys even after they have boobed or made a mistake, they won't admit it, but go further to endeavour to justify the mistake made.
Altogether I have put up three different modifications for to make the sweep work and these people, just because it's me, won't have anything to do with them, even after they are cornered and asked what is wrong with it and we write down the number of points for and against and mine win hands down the answer is NO.
Altogether, we have wasted 3 days because of this incompetence and it is a rather sorry state to be in. However, it does not affect me as I am here only to operate the aircraft.
#####(Name withheld by son) is a very much self opiniated man and I would give him an idea or two and he will have the crass ego to produce them as his own ideas. To bed.
Posted by William Le Couteur at 2:28 AM